What is Decentralised Finance? (DeFi)

Defi is one of the hottest areas in cryptocurrency at present, meaning there are huge ramifications for any smart investor, too. Whether you’re looking for a diversified way to put your cash to work for you, or you’re simply curious about the world of blockchain, today we’re taking a deep dive into this fascinating area of the cryptocurrency spectrum.

Users of decentralised finance systems don’t need to trust one institution with their money and give them complete control over it—instead, users directly control their own money and aren’t at risk of being tricked or having their funds frozen by an intermediary like they might with a bank or broker. However, there are also drawbacks. We will mention all of these in this post.

Let’s take a closer look at what makes these services so different from centralised alternatives, who are using them, and why you should care about this new trend.

What is Decentralised Finance?

As we mentioned, DeFi stands for decentralised finance. But what does that actually mean? It’s the concept of ‘taking over’ finance, away from the traditional banking arena. DeFi offers a brand new way of providing financial services without using any of the centralised intermediaries. Instead automated protocols are used.

This is done primarily through the use of cryptocurrencies(such as bitcoin and ethereum) and smart contracts eliminating the need for the third parties.

Smart contracts are enforceable agreements that bypass banks and lawyers, instead of using online blockchain technology to provide both parties with a measure of confidence.

It’s a booming industry. Since late 2017, we’ve seen the value of currency locked into DeFi contracts grow from £1.6 million to £5.3 billion. Yes, billion. It’s become known in the industry as ‘lego money because what you have can be stacked together through a variety of the dApps (decentralised platforms and products) for you to maximize your investment returns in whatever way pleases you.

Obviously, the applications are still niche, and the blockchain and cryptocurrency, in general, are still seen as off-the-grid financial products in many spheres. All the same, this technology has a lot of future-driven power. It could easily become a way one could, for example, purchase a house with a mortgage through a decentralised finance platform. The mortgage would be tokenized to a blockchain ledger as the collateral in the agreement, and, should you default, the deed could be transferred to the lender immediately through technology. With the potential to have no lawyer or bank involved, the possibility of a significant price reduction is real, although not without risk.

Most DeFi financial products hinge on the Ethereum blockchain network, and it represents another step forward in what’s come to be known as ‘disruptive financial technology’ that first sprang to life a little over a decade ago with Bitcoin. Today, we see decentralised exchanges, called dexs, allowing peer-to-peer financial trading. While Uniswap is perhaps the most well-known of these, there’s plenty around.

DeFi services have grown to include: 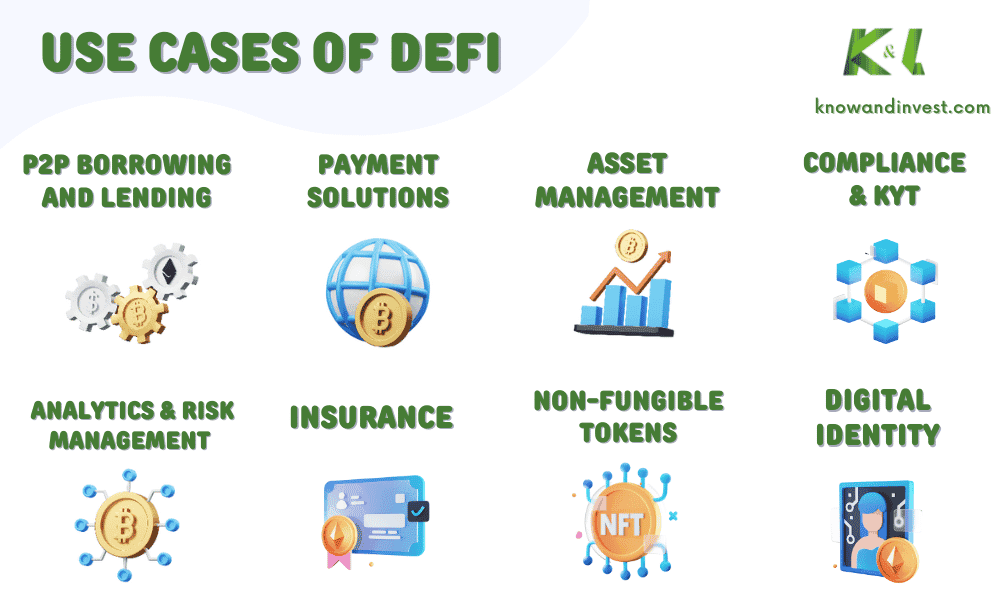 Why DeFi Became a ‘Thing’?

Centralised finance has been the norm for the entirety of modern finance. We’ve gone from goldsmiths storing precious metals for customers in the 16th century to the rise of investment banks in the 19th and 20th centuries.

In the early 2000s, the rise of online banking and the popularity of peer-to-peer lending—the first examples of DeFi—gave us a taste of what the future of finance might look like.

The 2008 financial crisis, however, served as a stark reminder of the flaws of centralised finance. It was in this period that the first blockchain technology was developed. It took a decade, but decentralised finance is now coming into its own and reshaping the landscape of financial services.

It’s no secret that financial regulators have been lagging desperately behind the developments in the digital space. Decentralized finance primarily flourishes because of that vacuum. Many are tired of the traditional unsecured lending arena, in which lenders and borrowers must be fully identified with each other, and the borrower’s ability to pay is assessed by third parties who don’t always seem to have everyone’s best interests at heart.

DeFi removes these requirements, working on a system of privacy preservation and mutual trust through blockchain.

The argument is that much of our challenges in the financial innovation arena cannot be addressed due to archaic regulations any longer relevant to society creating a hostile environment for financial growth.

It’s a difficult balance. You don’t want to stifle innovation, nor do you want to fail to protect citizens from the scams and dangers inherent in an unregulated space. We have finally, however, seen the US Securities and Exchange Commission (SEC) pay attention to the potential of the blockchain.

We’ve also seen other mainstream players step in. Many high-street financial institutions now recognise DeFi, and 75 key world banks are trialing blockchain technology as a method to speed up payments through the Interbank Information Network.

Ties to the Stock Market

Asset management funds also want their share of the decentralised finance pie. To date, Grayscale is the world’s largest crypto-investment fund, holding over US$5.2 billion of crypto-based assets, including over US$4 billion worth of Bitcoin.

This effort has expanded with the economic devastation brought by the global pandemic. With interest rates frighteningly low across a huge range of financial instruments, and some signs that global interest rates may slip even lower, decentralised finance offers the potential for far higher returns. The stable coin Tether, for example, has been able to offer up a 6.75% annualised interest rate in comparison.

In a world where many don’t own bank accounts, but almost everyone has a smartphone, it also makes sense to take finance to the people, as it were.

Of course, the growth in cryptocurrency isn’t all driven by level-headed planning. Most of the tokens are worth near nothing in practical terms, but people are scared to be left out of their explosive growth and see it as a way to ‘get rich quick’. So there’s also some not entirely logical exuberance powering the boom and drive the sentiment cycle.

How Does Blockchain Technology Work?

Blockchain technology uses computer algorithms to create a secure and decentralised way to store data. Fundamentally, this is a record of transactions or data exchanges between parties. The data is encrypted so that no one can access it unless they have the correct key to unlock it. Using blockchain technology means that the data isn’t kept in one place. It’s distributed among a network of computers.

This makes it harder for hackers to break into one computer and steal the data since they would need to breach each computer in the network. Blockchain technology uses “smart contracts” to automate certain actions. For example, if Person A agrees to sell an asset to Person B for a certain price, the blockchain ledger will automatically transfer the asset and the funds without either person having to deal with a third party.

The Benefits of Decentralised Finance

A few benefits of decentralised finance that have been touted include transparency and a fairer system.

The main value propositions of DeFi are as follows:

The main drawbacks to decentralized finance are that it’s currently less user-friendly than centralized systems and the reliability and trustworthiness of these systems are unproven.

Centralized systems are user-friendly because they are designed specifically for the average person. Decentralised systems, on the other hand, are generally designed for tech-savvy people who are comfortable with using complex computer systems.

Another possible disadvantage of DeFi is the 51% attack. It is a hypothetical situation where a miner(or collaborating group of miners) has more than half of the hash power(or computing power) on a blockchain network. They can then perform double spends, rewrite any transaction, or otherwise manipulate the network as they please. (Proof-of-work mechanism is devised to make it which is a way to confirm the transactions and make it harder for malignant users to rewrite past transactions. However, it is not efficient in the long-run for a robust network. Using the proof-of-stake protocol may be a much more secure option for the blockchain networks against a 51% attack.)

Lastly, decentralised systems are still very new. As a result, we don’t know how secure they really are. They haven’t faced the same amount of real-world testing as traditional financial institutions such as banks and building societies. There are also problems such as scalability and lower levels of liquidity.

Is This the Future of Finance?

DeFi has the potential to help address lots of flaws of the modern banking system. While some progress is still necessary for surpassing the drawbacks of DeFi we just mentioned, it can open up the financial system to people on the street in a way we haven’t seen for decades. It would be fair to say that it is here to stay.

So the real question should be, how can this be guided with the right checks and balances to minimise risk, without replicating the faults of the system people are so eager to escape? How do we spread the potential benefits to the people who need them most? That will be the major challenge for the future of decentralised finance.

For now, for investors interested in getting into the cryptocurrency arena, there’s a world of opportunity waiting for you to explore. While this may look very different from the more traditional financial instruments you’ve seen, it’s certainly worth considering what role decentralised finance has to play in your investment strategy going forward.

Orhun is a personal finance and investment enthusiast. Especially interested in behavioural finance and how psychology plays an important part in financial decision making. Orhun holds an MSc degree in finance from The University of Edinburgh.

Why is Gold Valuable? Reasons We Value Gold

What is Eurobond? Definition, Advantages and Disadvantages

Why is Gold Valuable? Reasons We Value Gold

How to Invest in Startups as a Beginner